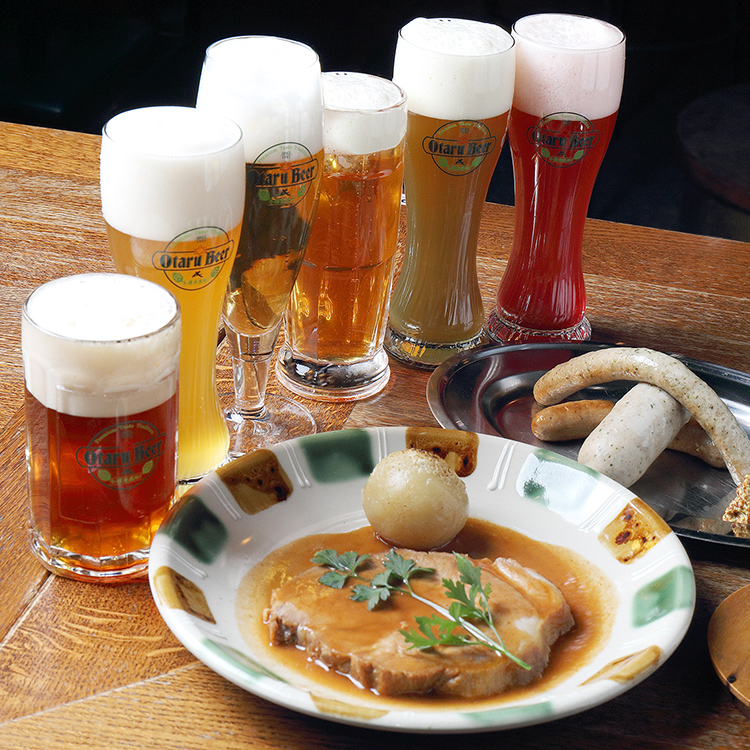 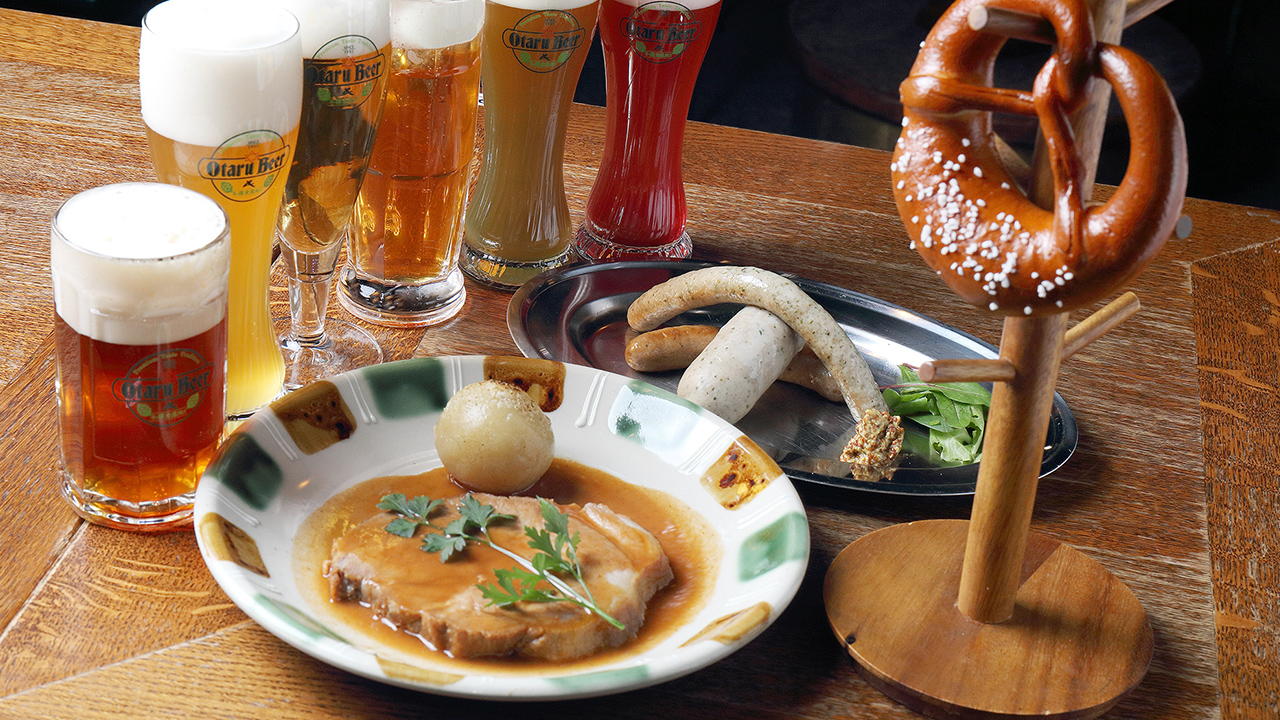 From eighteenth-century Germany to twenty-first-century Japan, an Otaru microbrewery brings an old beer to a new audience

Find beer, cocktails, and a Japanese take on German cuisine at Otaru Soko No. 1. 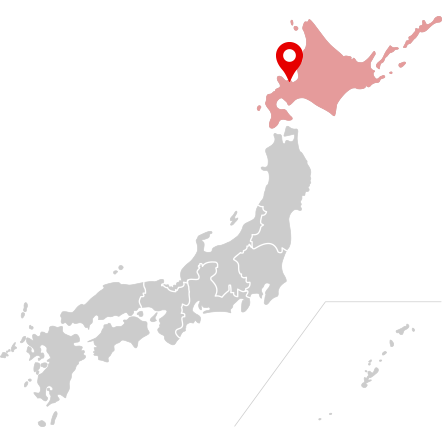 Japan’s northernmost prefecture, Hokkaido, beckons with promises of crystal-clear air, stunning scenery, and fresh seafood. Journey to this island of abundant nature and wide-open skies—and be sure to make a stop in the port city of Otaru while you’re at it. Located on the west coast of the prefecture, the city has many historical buildings, one of Hokkaido’s best nightscapes, and the picturesque Otaru Canal, still lined with warehouses from the port’s bustling past.

Located among the old warehouses is a brewhouse producing authentic German beer and serving hearty German-style cuisine. This is Otaru Beer’s Otaru Soko No. 1 brewery. Just how did authentic German brewing methods find their way to this corner of Japan? Drop by for a brewery tour to find out—and then sit back and enjoy a tipple or two.

Historic Beer in a Historic Setting

German beer may be the last thing you would expect to find in a northern Japanese port city, but since 1995, Otaru Soko No. 1 has been brewing and serving up pilsner, weiss beer, and dunkel beer. In that year, a German brewmaster was brought in to ensure an authentic method of production in both spirit and practice, one which is over 250 years old. The method remains virtually unchanged, watched over by the brewmaster, who is in fact a descendent of the method’s originator.

But why the emphasis on traditional methods? It all comes down to a belief that the old way results in a finished product that is superior to beer produced using modern, mass-production technology.

A Brewery to Match the Brew

Otaru Beer is made at two facilities in Otaru—the Otaru Zenibako Brewery, which can be found on the outskirts of town and produces bottled beer for over-the-counter sales and beer for business use; and the Otaru Soko No. 1, which is adjacent to the canal.

Otaru Soko No. 1 makes good use of the city’s early architecture. Its stately stone walls are as worthy of admiration as its refurbished interior. Built in 1924 and used as a warehouse for many years, the former storage building is distinguished by its timber framing and high ceiling, which give it a spacious, airy atmosphere.

In the center of the floor space, golden mash tuns shimmer, drawing the attention of visitors as they enjoy their beers.

Otaru Beer is unlike anything you’ll find elsewhere in Japan. The traditional German production method causes the beer’s shelf life to be short and its sensitivity level, sky-high. In fact, you won’t find any of the brewery’s beer available beyond a hundred-kilometer radius of the brewery.

This is because, unlike for most beer, the yeast is not removed at the end of the manufacturing process. While this leads to a rich flavor and high nutritional value, it also means that the beer is sensitive to temperature and vibration. Should the beer become too warm—it tops out at twenty-four degrees Celsius—or get bounced around too much, the yeast will die.

The takeaway? Take advantage while you are in Otaru! Since Otaru Soko No. 1 opens at 11:09 a.m., beer aficionados have plenty of time. Authentic German beer with a lunch of German cuisine? Cheers to that!

Dive into Authenticity with a Brewery Tour

Before downing a brew, set aside about twenty minutes to get better acquainted with your beverage by taking a tour. Between 11:10 a.m. and 5:40 p.m., free tours are held every thirty minutes. Join one to hear all about beer as well as the brewery’s history, ingredients, and manufacturing methods.

Raise a Glass to the Main Lineup

Otaru Soko No. 1 produces pilsner, dunkel, and weiss beers, which are available in bottles over the counter and in stores and on draft at restaurants.

Light and refreshing, pilsner pairs well with a variety of dishes, including meat and cheese. Stay local by ordering schweinebraten off the menu, prepared with pork from the nearby town of Akaigawa.

The bubbly weiss has a banana-like fruitiness and goes well with dishes without too strong a flavor of their own, like pretzels and weisswurst, a white sausage with herbs and spices.

For a rich, caramel flavor and creamy foam, a dark brown dunkel is the way to go. Being substantial, it is best enjoyed with appetizers such as sausages or terrine and with meat dishes.

Salads, potato dishes, pasta, pizza, paella, and more round out the food menu, with something to match every taste.

Dive into the world of beer cocktails, which have been popular in Germany for over five hundred years. Himbeer, made with weiss and raspberry syrup, and waldmeister, an herbed beer cocktail of weiss and woodruff syrup, are two not to be missed.

The brewery also produces a lightly carbonated apple cider whose subtle sweetness lets the pleasant tartness of the apples shine through.

Among the historical warehouses that border the Otaru Canal, delight in historically authentic German beer and delicious German cuisine. Take the opportunity to savor flavors that hark back 250 years, and become familiar with the methods brought to Japan from halfway around the world. Kampai! Or rather, Prost! Here’s to good food, exceptional drink, and stunning surroundings.

Otaru is located on the west coast of Japan’s northernmost prefecture. The nearest major city to Otaru is the prefectural capital of Sapporo. There are direct flights from Tokyo and other domestic airports to Sapporo’s New Chitose Airport. Otaru is approximately one hour and forty minutes by train from the airport and fifty minutes by train from Sapporo Station. From Otaru Station, Otaru Soko No. 1 can be reached on foot in approximately twelve minutes.

Otaru Soko No. 1 is located in a popular tourist area along the Otaru Canal. Nearby, visitors will find the bridge Asakusabashi, a top site for taking photos and the embarkation point for the sightseeing boat, Otaru Canal Cruise. Sushi lovers will want to explore Sushiyadori, a street with over twenty sushi shops. For glasswork, music boxes, and other souvenirs, be sure to check out Sakaimachidori. Enjoy a stellar view of the city from Mt. Tengu without breaking a sweat by hopping aboard the Otaru Tenguyama Ropeway. In winter, strap on your skis and swoop down Mt. Tengu’s slopes.

The beer produced by Otaru Beer is brewed using authentic German brewing methods. Since Otaru Beer was established in 1995, a German brewmaster has overseen production using methods that are more than 250 years old. The main lineup consists of pilsner, weiss, and dunkel beers, while beer cocktails and apple cider produced by the brewery are also served. German beer brewed using traditional methods is a rarity in Japan. Prone to spoilage if not properly handled, Otaru Beer is only available in the Otaru area. 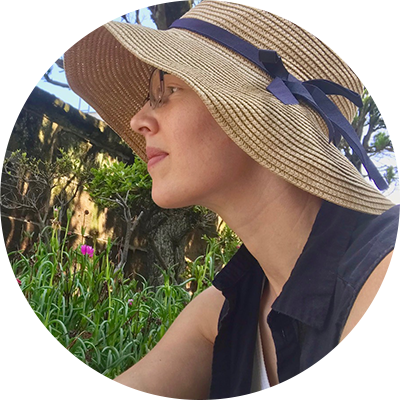