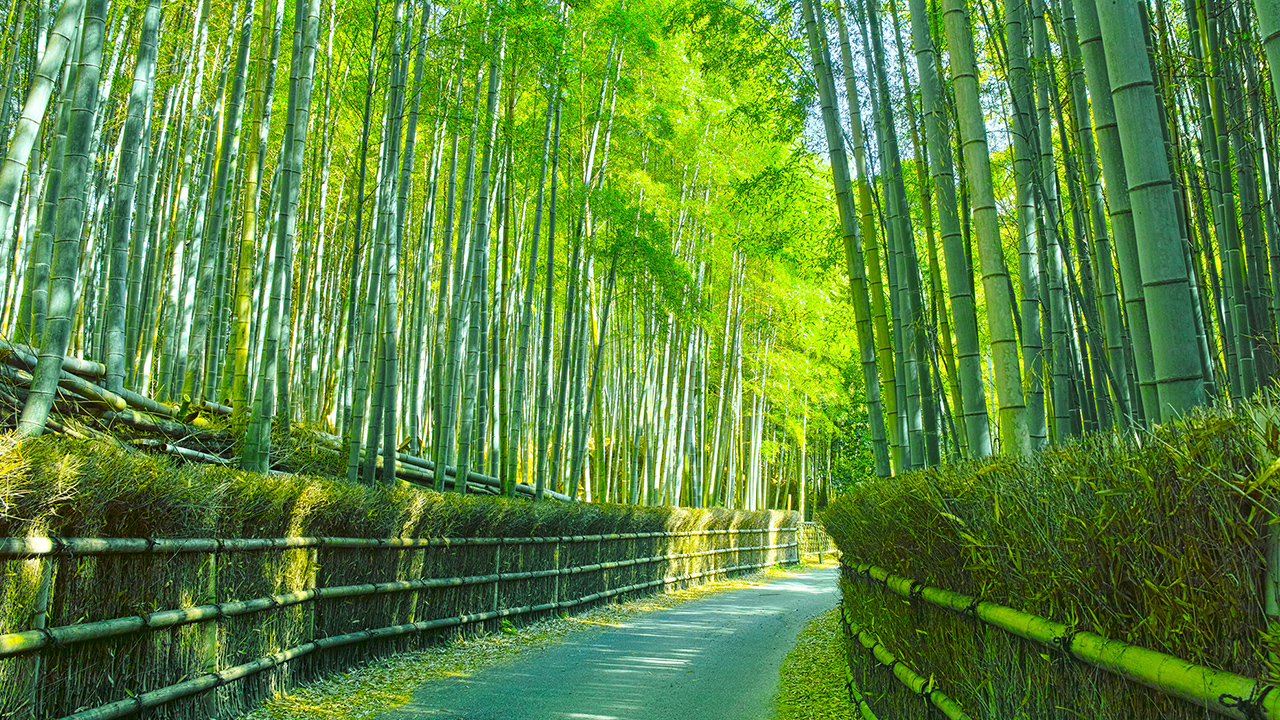 Travel southwest of Kyoto to discover the joys of bamboo, the roots of a famous bento, and a surprising connection to Thomas Edison

Wander the bamboo-lined path, before finding the plant actually has a place in Kyoto cuisine. 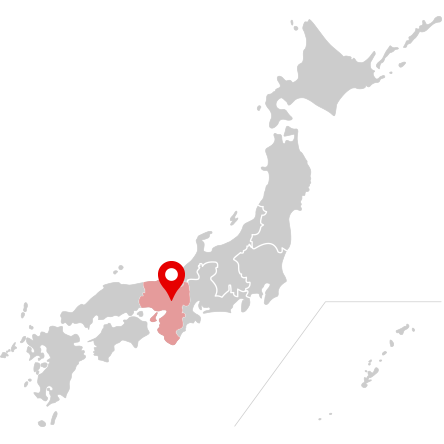 Leave the city of Kyoto behind for a quieter, less crowded day of exploration. Let your wanderings take you to the Otokuni district and the neighboring city of Yawata, located to the southwest of Kyoto, where bamboo forests rustle in the wind, bamboo shoots take center stage in the local cuisine, and a vermilion shrine stands tall atop a mountain.

This calmer part of the prefecture provides a chance to experience Kyoto without the crowds, and it’s within an hour of the city center. Save a day of your Kyoto visit for a trip beyond the city’s borders, and bask in the serenity of Kyoto’s bamboo country.

Bamboo as Far as the Eye Can See!

When it comes to bamboo in the Kyoto area, most people flock to Arashimaya Bamboo Grove. A much better destination, however, is Take no Michi (Bamboo Road), a little-known gem in the hills of the city of Muko in the Otokuni district. Unlike in Arashimaya, in Muko you can stroll the 1.8-kilometer road in quiet contemplation, content to enjoy the verdant bamboo stalks rising high into the sky and the sound of their leaves rustling in the breeze.

Otokuni bamboo shoots are known for being particularly delicious. This is said to be attributable to the soil, which is blanketed in straw and heaped with earth dug up when harvesting bamboo shoots in the same forest.

Spend the morning beneath the whispering leaves of Take no Michi before heading onward to Iwashimizu Hachimangu Shrine in Yawata and its own renowned bamboo forest. Along the way, dine on local delicacies and savor the flavors and textures of the region’s cuisine.

Enjoy One of Spring’s Delights All Year Long

Bamboo shoots sprout from the ground in early spring, and the season is over before you know it. At the restaurant Kyo no Ajidokoro Uosu, however, bamboo shoots (takenoko), can be relished year-round. The restaurant carefully selects shoots, then boils and preserves them the day they’re dug.

Order the restaurant’s unique dish, Takenoko Sugata Zushi, for a visual treat as well as a tasty one. The shoots are carefully prepared to remove their acrid taste while preserving their aroma, and then are simmered in seasonings until tender yet crisp. The inner portion of the shoots is removed and replaced with vinegared rice seasoned with Japanese pepper and yuzu. Since no shoyu (soy sauce) is used, the finished dish stays true to its original raw state with a light, whitish color. Tangy, refreshing, and easy to eat, Kyo no Ajidokoro Uosu’s sugata zushi is a wonderful—not to mention beautiful—way to enjoy bamboo shoots.

Finish the meal off with a bamboo sweet, like sasa yokan. A jellied dessert made with bamboo shoots and sasa (bamboo grass), sasa yokan consists of shoots boiled in syrup and served on yokan jelly with shiratama (glutinous-rice dumplings), and topped with coarse anko (sweet bean paste) and a dusting of sasa powder. It’s an interesting combination of Japanese ingredients that come together in complete harmony.

It’s not often that the versatility of bamboo shoots is on display in such a way, but that’s one of the charms of this area of Kyoto—bamboo and the products made from it can be found in the most unusual places.

Find Illumination Both Spiritual and Earthly at Iwashimizu Hachimangu Shrine

Alight from the cable car at Cable-hachimangu-sanjo Station, and find your way to Iwashimizu Hachimangu, a shrine established on the mountain Otokoyama in 859 CE to protect ancient Kyoto.

Revered for many years, Iwashimizu Hachimangu—which enshrines Ojin Tenno, an ancient emperor; the goddess Himegami; and Jingu Kogo, an ancient empress—is one of Japan’s most important and architecturally impressive shrines.

The current shaden (main hall) was reconstructed by Tokugawa Iemitsu (1604–1651) and is the oldest and largest of the remaining Hachiman-zukuri shrines, an architectural style where two parallel structures with gabled roofs are interconnected, forming a single building while appearing to be two separate buildings. Iwashimizu Hachimangu has benefited from expert craftsmanship and attentive care over the years, and in 2016 it was designated a National Treasure of Japan.

Explore the shrine grounds, stopping a moment to admire the monument to Thomas Edison. Unexpected, perhaps, but Edison and Yawata are connected by the fibers of the city’s high-quality bamboo, which Edison used to make filaments for his lightbulbs. The bamboo filaments significantly lengthened the life span of lightbulbs, and Yawata bamboo became an internationally valued commodity.

Once you’ve finished pondering the interesting ways in which the world is interconnected, turn your thoughts again to local cuisine, Shokado Bento in particular. Traditional Japanese dishes served in a Japanese-style lunch box, this elegant fare originates in the area—and its namesake lived right here.

In the days when Buddhism and Shintoism were intertwined, temples were also located on Otokoyama. Shojo, a monk who was an important contributor to the arts and culture of the early Edo period (1603–1867), lived in the Takimoto-bo monk’s quarters as chief priest. Toward the end of his life, he retreated to the Izumi-bo quarters, building a thatched hut there in 1637. He named the hut Shokado and adopted the name as one of his own as well, becoming known as Shokado Shojo.

To find the remains of the hut, head toward the gate Nanso-mon and continue a short way along the omotesando (main approach to a shrine). When you reach the junction by Kagekiyotsuka, head to the right toward Iwashimizu-sha Shrine. It is along this stretch of path that you’ll find what remains of Shokado.

Take care as you wander, since the stairs from the urasando (rear approach) are off-limits because of damage sustained during a typhoon.

Now that you’re familiar with Shokado Shojo and his hut, it’s time to enjoy the bento that bears his name.

Savor the Seasons with a Shokado Bento

KYOTO KITCHO is a venerable restaurant that serves traditional Japanese cuisine. In 2002, it opened a branch on the grounds of the beautiful Shokado Garden Art Museum.

Admire the gardens while relishing dishes as artistic as they are delicious. Each of the lunch box’s four compartments contains a different course, including sashimi, seasonal delicacies, a grilled dish, and a simmered dish. The design of the box allows items with vastly different flavors and temperatures to be served next to each other without affecting the taste or aroma.

Traditional Japanese cuisine uses seasonal ingredients, so every element of the meal is at its freshest. Of course, spring sees plenty of local bamboo shoots in the bento. Colors are also carefully arranged, creating a feast for the eyes, while flavors are painstakingly balanced for utmost enjoyment. It’s Japanese cuisine at its finest and a brilliant way to end a day.

Roam the bamboo forests of Kyoto and appreciate the silence that reigns in this quieter side of the ancient capital. There’s so much to enjoy outside the city center for those willing to search for it. Hop on a train and explore—you’re bound to find something incredible.

The Otokuni district and the city of Yawata are located to the southwest of the city of Kyoto. To reach Take no Michi (Bamboo Road) from Kyoto, take the Karasuma Line subway from Kyoto Station to Shijo Station and transfer to Hankyu Karasuma Station (five minutes). From there, board a Hankyu-Kyoto Line train and disembark at Higashi-Muko Station (thirteen minutes). Take no Michi is a fifteen-minute walk from the station.

It takes approximately ten minutes to travel from Take no Michi to Kyo no Ajidokoro Uosu by taxi.

To travel from Kyo no Ajidokoro Uosu to Iwashimizu Hachimangu Shrine, go first to Nagaoka-Tenjin Station on foot (1.5 kilometers) or by taxi. From the station, board a Hankyu-Kyoto Line semi-express train and disembark at Nishiyama-Tennozan Station. From there, walk to the Hankyu Nishiyama-Tennozan bus station (approximately two minutes) and board a bus bound for Keihan Yodo Station. Disembark at the station and transfer to Yoda Station (two-minute walk). Take the Keihan Main Line to Iwashimizu-Hachimangu Station and walk five minutes to Cable-hachimangu-guchi Station. Take the cable car to Cable-hachimangu-sanjo Station. The trip takes approximately one hour, depending on connection times.

To travel from Iwashimizu-Hachimangu Station to Kyoto Kitcho, board a Keihan No. 32 bus bound for Kuzuha Station and disembark at Oshiba/Shokado-mae. From there, it is approximately a two-minute walk to Kyoto Kitcho.

The Nagaokakyo and Yawata area is dotted with temples and shrines, many of which are truly stunning during the autumn season when the leaves change color. Nagaoka Tenmangu Shrine, the temple Ao Komyoji, and the temple Shoboji are just three of the many places of worship to visit. Those with an interest in ancient history will want to check out Igenoyama Kofun Tumulus, Kyoto’s largest ancient burial mound. Before or after enjoying a meal at Kyoto Kitcho, take the time to wander the gardens and explore the Shokado Garden Art Museum.

Bamboo shoots (takenoko) are a spring treat. Dug from bamboo forests, the shoots are time consuming to prepare but a popular ingredient to add to rice and other dishes. In springtime in rural areas, it’s not unusual to see bamboo enthusiasts, shovel in hand, heading into local bamboo forests early in the morning to harvest shoots for the day’s meals.

Shokado Bento consists of traditional Japanese cuisine served in an elegant bento box. Sashimi, seasonal delicacies and grilled and simmered dishes are arranged in an aesthetically pleasing fashion in each of the box’s four compartments along with soup and other courses in additional dishware. As traditional Japanese cuisine is strongly associated with the seasons, both the ingredients and the color scheme correspond to the current season for a beautiful and delicious meal.