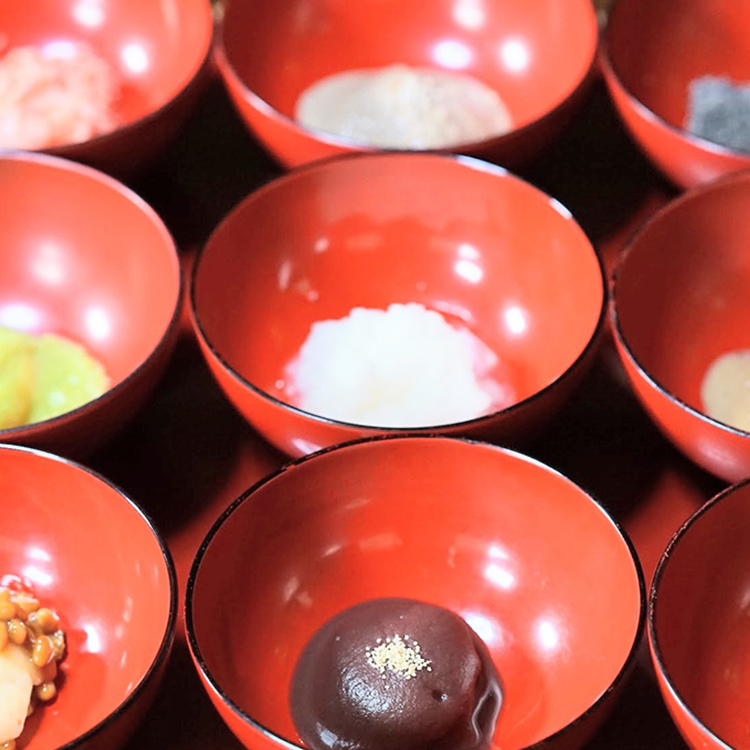 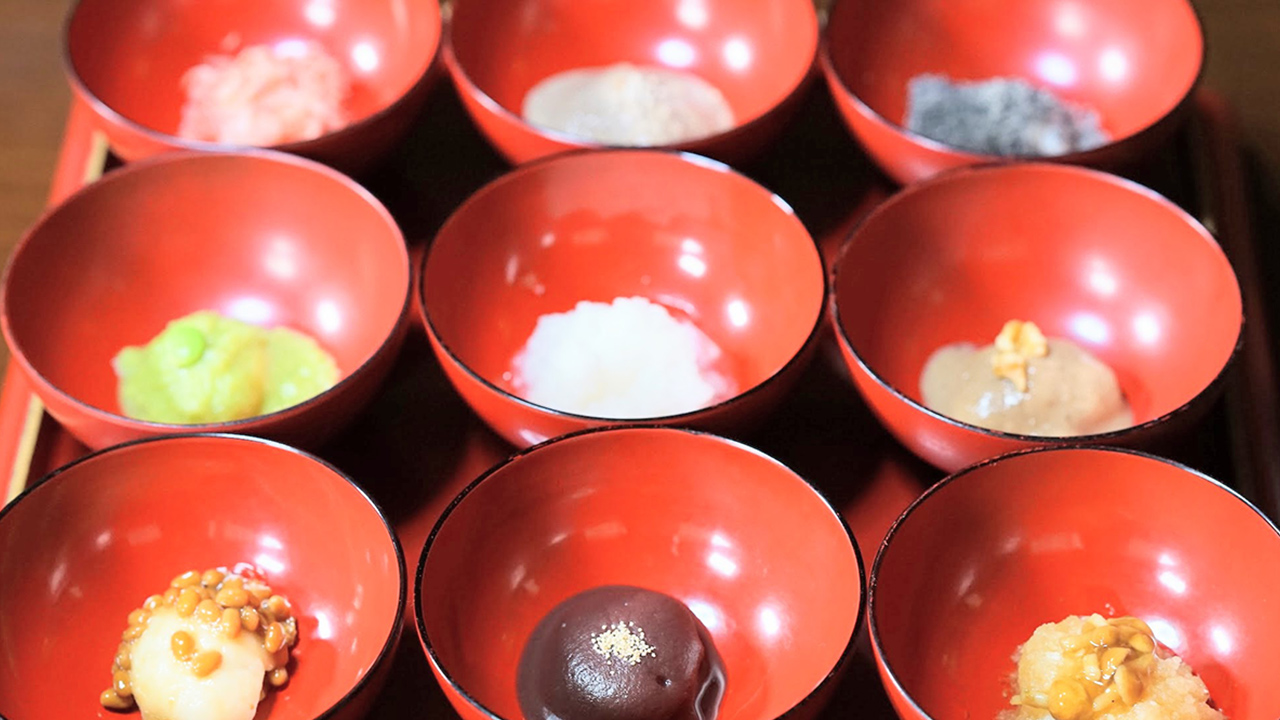 The samurai mochi tradition of Ichinoseki and Hiraizumi

Mochi refined: the sophisticated mochi cuisine of the samurai warriors is still served in the Ichinoseki-Hiraizumi area. 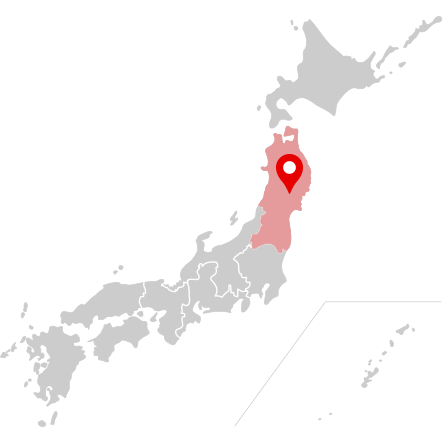 For centuries, people have cooked and pounded sticky (glutinous) rice to make one of Japan’s quintessential foods: mochi. When freshly made, mochi is smooth, soft, and chewy. After cooling, it can be formed into hard, compact cakes that play an important part in traditional ceremonies and are served on other special occasions.

Satisfying, filling, and energizing, mochi can be eaten with many different foods, both sweet and savory. Nowhere in Japan is it enjoyed and celebrated more than in Tohoku, the rural northeast of the country, especially in the Ichinoseki-Hiraizumi area. No visit to this historic part of Japan is complete without a feast highlighting this local specialty.

The Rice at the Heart of the Region

Thanks to its plentiful water and relatively mild climate, the area around the city of Ichinoseki and the nearby town of Hiraizumi is one of the largest rice-growing regions in northeast Japan. As autumn arrives, the fields of swaying rice plants turn a beautiful golden brown. By late September, the harvest season has begun.

In the old days, the rice would be cut by hand and the sheaves stacked up on racks of wooden poles to dry in the sunshine. Known as tenpiboshi, this drying method is used to reduce the moisture content in the grains so that they do not spoil during storage in the year ahead. Even today, this traditional method lives on in some places, but most farmers now use mechanical equipment for both harvesting and drying the rice—not just for convenience but to ensure that the rice dries fully even when there is heavy rainfall.

Much of the crop grown in this region is not the usual short-grain rice served with most Japanese cuisine. Instead it is mochigome, a variant that is more glutinous and thus much stickier when cooked. Mochigome can be substituted for regular rice, and it is often cooked with azuki (red beans) to make a celebratory rice dish known as sekihan (red rice). But more commonly, this sticky rice is cooked and pounded to make mochi.

When mochi is freshly made and still warm, it is smooth and soft, with a distinctive sticky consistency. But once it’s allowed to cool down and harden, it can be formed into compact, hard cakes that play an important role in traditional ceremonies and are served on other special occasions. Ahead of the New Year celebrations, rice-pounding events are held widely across the country—the cooked mochigome rice is pounded in a huge wooden mortar, often carved out of a tree trunk, using an equally massive mallet as a giant pestle.

Since ancient times, mochi has been considered a highly propitious offering to the deities. This deeply held belief is one factor that has led to the development of a sophisticated and ritualized mochi cuisine in the Ichinoseki-Hiraizumi area.

About four hundred years ago, this area was part of the powerful Sendai feudal domain under the great warrior-general Date Masamune. One of the orders issued by the Date clan was that farmers make mochi and offer it to the temples and shrines on the first and fifteenth days of each month. Eventually this order was extended so that ordinary people were required to prepare mochi on at least sixty days a year. There was even an official mochi calendar published each year specifying the exact schedule.

During the Edo period (1603-1867), an elaborate cuisine based on mochi developed within the Date domain. Known as mochi honzen (full-course meal), it involved strictly formalized rules of conduct. Considered the highest level of hospitality, mochi honzen is still served on significant occasions.

The meal comprises three soups and seven vegetable dishes, each including mochi, following the precepts originally laid out by the feudal lord Date Masamune. There are a number of restaurants in Ichinoseki, where you can take part in this refined culinary tradition that has remained unbroken for centuries.

Under the rule of the samurai, rice was considered a luxury food. Even though the farmers were making offerings of mochi, they were poor and could not afford to eat the rice cakes themselves. Instead, they had to make their mochi using poor-quality rice mixed with lesser grains such as millet. This low-grade substitute was known as shiina mochi (barren-rice-paddy rice cakes).

In order to make shiina mochi palatable, the farmers came up with many ways to improve them by adding other ingredients. Nowadays, the area is prosperous, and mochi is affordable to all. But the custom of serving many different toppings—now with the finest white mochi—has survived and proliferated.

The Diverse World of Mochi

Mochi is now most commonly enjoyed as a sweet confection in contemporary Japan. The classic way to serve it is with sweetened azuki, creating the auspicious color combination of red and white. In the Tohoku region, an equally popular topping is zunda, a sweetened paste of mashed edamame (immature green soybeans). A third common variant is to smother the mochi with kinako (roasted soybean flour).

Among the options for savory rice cakes, one of the simplest is to wrap it in nori (dried laver seaweed) and serve it with a shoyu (soy-sauce) dip. Mochi is also added to ozoni, a soup commonly eaten on New Year’s Day as part of the celebration. Other foods traditionally combined with mochi are numaebi (tiny dried shrimp), natto (fermented soybeans), grated daikon (large white radish), and various types of cooked mushrooms.

The Future of Mochi

A growing number of creative dishes that include mochi have also been developed, some with Western flavors. These nontraditional dishes include mochi cabbage rolls, mochi spring rolls, and even mochi pizza with melted cheese. This is a clear sign that mochi not only remains as popular as ever in this corner of Tohoku but continues to be adapted for different culinary uses.

To reach Ichinoseki from Tokyo, you can travel by Shinkansen, which takes two hours and fifteen minutes by the faster Hayabusa service (changing at Sendai) or two hours and thirty minutes by the slightly slower Yamabiko service (direct). From Ichinoseki to Hiraizumi, local Tohoku Line trains take about ten minutes. There is also a convenient bus service. By air, the best option is to fly to Sendai and then continue by train or rental car.

Hiraizumi is renowned for its UNESCO World Heritage cultural sites, especially the Konjikido (Golden Hall) of the temple Chusonji and the temple garden of Motsuji. Half an hour by train from Ichinoseki is the Geibi Gorge (Geibikei), where boatmen ferry passengers through one of the most scenic landscapes in Tohoku.

Mochi is a type of rice cake made from sticky (glutinous) rice that is steamed and then pounded to give it a smooth, chewy texture. This traditional food remains very popular in the Ichinoseki-Hiraizumi area, where it is served with different kinds of toppings.