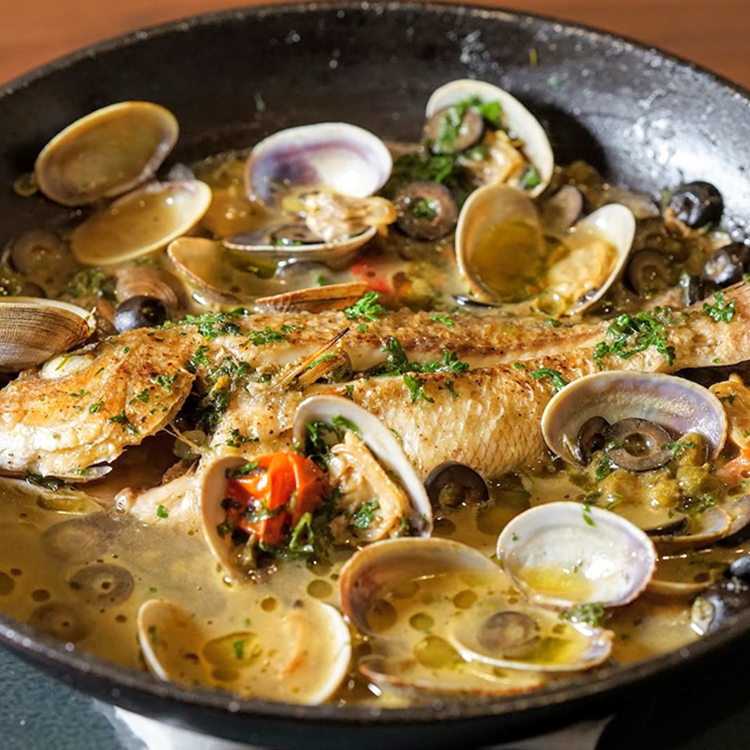 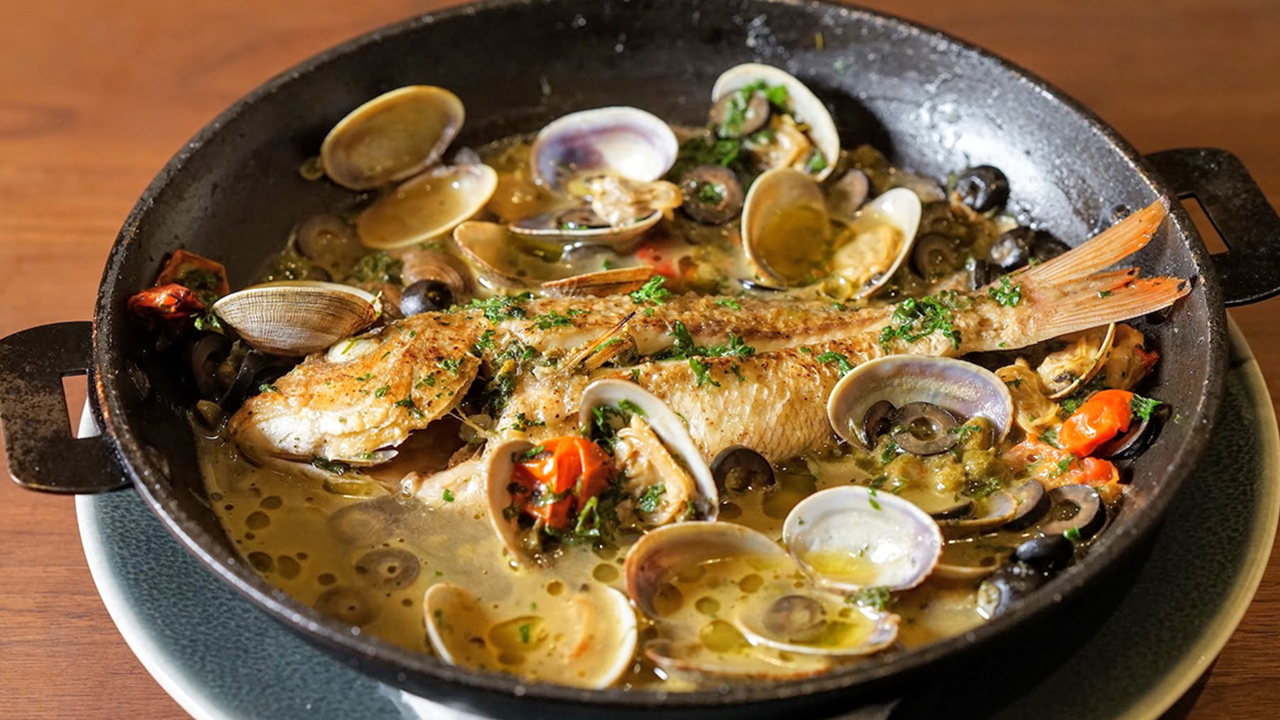 The city of Tsuruoka, in Yamagata Prefecture along the Japan Sea coast, boasts a long and proud food culture. Blessed with an ideal position on the Shonai Plain, one of the country’s most fertile rice-growing areas, it has access to some of the finest seafood. This has given rise to a strong culinary tradition, leading Tsuruoka to become the first city in Japan to be designated a Creative City of Gastronomy by UNESCO.

To maintain its heritage, Tsuruoka has registered as many as 60 kinds of vegetables from the area as heirloom crops. There is also a growing focus on the environment—both on land and at sea. Within easy reach of the sacred Three Mountains of Dewa—Mount Haguro, Mount Gassan, and Mount Yudono—Tsuruoka has developed a global reputation as a center of culinary excellence thanks to a focus on a Buddhist vegetarian cuisine known asshojin ryori.

Tsuruoka boasts an enviable location. It lies at the center of the Shonai Plain in Yamagata Prefecture, one of Japan’s top rice-growing areas. Just a short distance away are the fertile waters of the Sea of Japan, beyond which rise Mount Haguro, Mount Gassan, and Mount Yudono—collectively known as Dewa Sanzan.

The area’s rich soil, fresh seafood, pure mountain water, and a climate that delivers four distinct seasons make Tsuruoka ideal for agriculture. Add to that a culinary tradition established over the centuries and you have all the ingredients for a culinary center. That’s why it was no big surprise that UNESCO announced in December 2014 that Tsuruoka had been chosen as a Creative City of Gastronomy—the first, and still only, city in Japan to receive the honor.

The long winters bring deep snow to the mountains and plain. Not only does this give the land a season of hibernation, it provides an abundant source of clear, clean water from the uplands. The conditions can be harsh, but the residents have a long culture of food preservation to see them through to spring.

As the days get longer, the first sansai (wild mountain vegetables) begin to peek through the snow. Locals have foraged for these since antiquity as part of their survival routine, and many local dishes continue to feature the plants, which are usually prepared in ways that accent but temper their bitter flavors, such as in tempura.

Spring ushers in the growing season. The paddies are filled with water and, once the rice seedlings have been transplanted, the landscape starts to fill with the fresh green of their leaves. There are also many other crops. To conserve the local agricultural heritage of seed selection handed down through the generations, Tsuruoka has registered as many as 60 varieties of heirloom vegetables.

One example is Dadacha-mame, a local variety of edamame (green soybean) that is known for its plump size and rounded flavor. The Dadacha-mame name can only be used for marketing young soybeans from a designated area that meet specific criteria of taste and sweetness.

Another influence on Tsuruoka’s food culture comes from the Dewa Sanzan. The three peaks are considered a sacred territory, where yamabushi (mountain priests) have converged to live, pray, and follow their ascetic practices for more than a thousand years. As part of Shugendo—a mountain religion that is an amalgamation of Shinto, Buddhist, and mountain asceticism traditions—adherents follow a diet comprised mainly of wild mountain plants. This way of eating based on local ingredients, is referred to as a “diet for life” and has had a strong influence on the Japanese version of the Buddhist vegetarian cuisine known as shojin ryori.

Dewa Sanzan is a fascinating area, and it is possible to arrange multi-day courses that offer a rigorous immersion in strict Shugendo practices. For those less inclined to asceticism, Tsuruoka makes an excellent base from which to hike and explore the mountains.

The Here and Now of Tsuruoka Gastronomy

Alongside local ingredients and recipes, there is a strong interest in incorporating the cuisine of other cultures. A growing number of restaurants in Tsuruoka are exploring ways of assimilating outside influences.

Chef Masayuki Okuda of Al-ché-cciano, a restaurant that focuses on Italian cuisine, is a leading proponent of Locavore cooking, which follows the principle of local production for local consumption—not unlike his yamabushi forebears. Working with the produce and food traditions of Tsuruoka, he has adapted versions of classic Italian recipes to local conditions.

Okuda has found that the vegetables grown in Tsuruoka have a higher water content compared with those in the dryer environment of southern Europe, and also have their own distinctive properties. One of his specialties is a risotto made with Dadacha-mame (green soybeans) from his hometown. Masayuki was able to showcase this dish at Expo 2015 in Milan, bringing this taste of Tsuruoka to Italian gourmets in their own country with great success.

Seafood is another area in which there are significant differences in flavor. One specialty is iwagaki, a variety of large rock oyster. Other catches include delicious soft squid, and fish such as hatahata (sandfish) and kandara (winter cod)—all landed at the nearby port of Nezugaseki.

Since gaining UNESCO recognition, Tsuruoka has developed a program it calls Tsuruoka Tourism, which invites visitors to discover the local gastronomy. You can learn about plants for yourself and gain hands-on experience, such as digging the shoots of the moso bamboo in spring, harvesting Dadacha-mame in summer, and pickling produce in autumn.

From Tokyo, the fastest way to reach Tsuruoka is to fly to Shonai Airport (one hour from Haneda International Airport), and then take a shuttle bus to Tsuruoka Station (about 30 minutes). By train, take the Joetsu Shinkansen to Niigata (about two hours), and transfer to a local train on the Uetsu Main Line. By the Inaho Limited Express, it also takes just shy of two hours to get to Tsuruoka.

When visiting the northeastern Tohoku region of Japan’s main island of Honshu, Tsuruoka is an easy addition. The climate is relatively mild throughout the year, but is famed for its intense snowfall in winter. Fortunately, there are many onsen (hot springs), so warming up is easy. From central Tsuruoka, the Dewa Sanzan peaks can be accessed in about 40 minutes via bus, which takes you to the base of the mountains where you can begin your hike.

Thanks to its location in Yamagata Prefecture, on the Japan Sea coast, Tsurukoa boasts a long, proud food culture and strong culinary tradition. In December 2014 it was designated a UNESCO Creative City of Gastronomy—the first and still only in Japan. Discover for yourself why the local cuisine—both traditional and innovative—is worth the pilgrimage for all gastronomes.