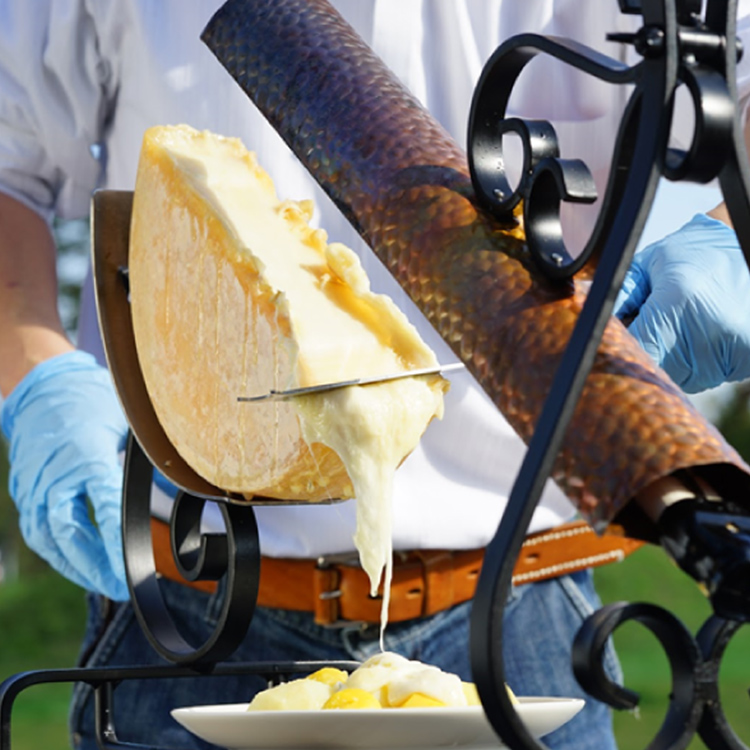 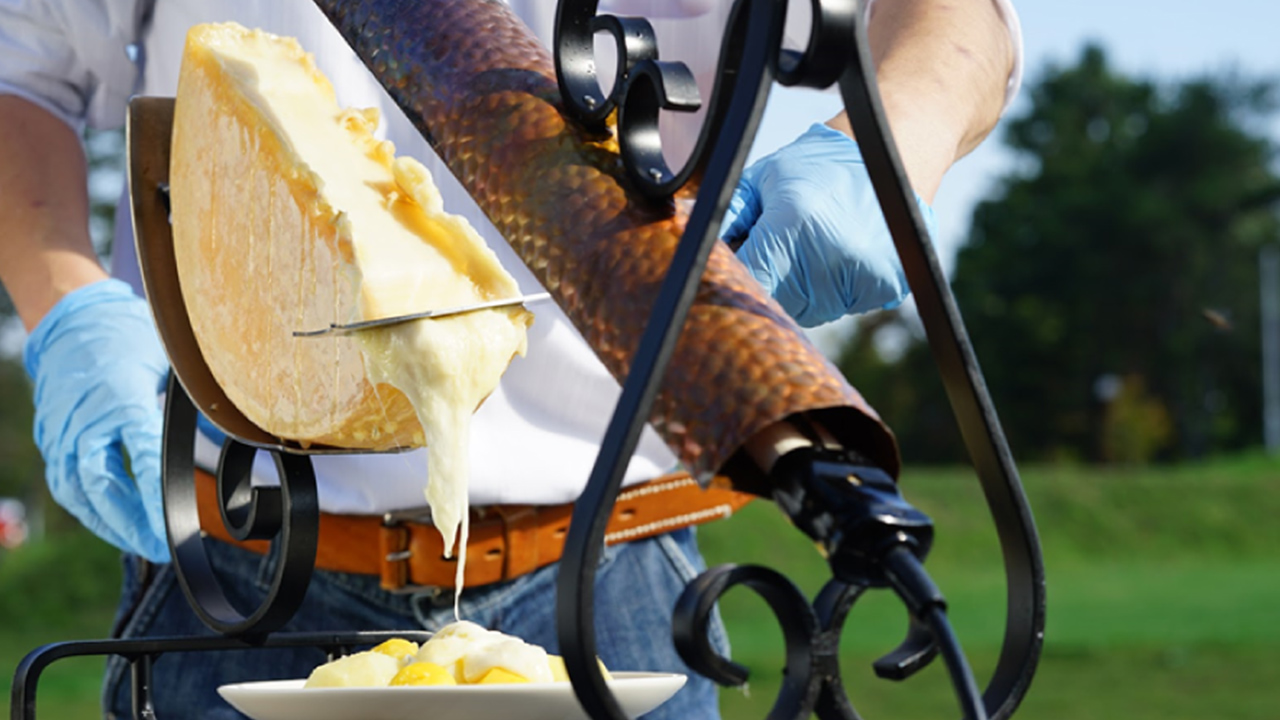 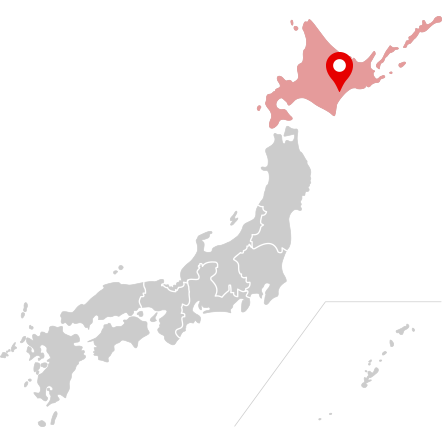 The Tokachi district in the east of Hokkaido is one of the richest agricultural areas in Japan. The wide-open pastureland, clear mountain water, and moderate climate make this the perfect location for grazing cattle. The area now has a well-established dairy industry, and the availability of high-quality milk has given rise to artisan cheese-making.

One Tokachi product that has gained considerable attention is raclette cheese. Washed in the local spring water, the cheese develops a flavor that is mild at first, but with depth. Warmed, scraped, and served molten-soft over vegetables grown in the Tokachi terroir, it is a treat that should be tasted by anyone visiting Japan’s northernmost main island.

Arriving in Hokkaido, in the far north of Japan, you will find yourself in a place very different from any other part of the country—with its vast, open landscape; broad skies; and uninterrupted view of the far horizon. This is not territory that lends itself to rice-growing. Instead, the fertile soil here gives rise to a patchwork of fields of wheat, corn, potatoes, grapes, and other crops—as well as green pastures where cattle quietly graze.

The climate, too, is quite different from that of the Japanese heartland: milder and less humid in summer, colder and snowier in winter. Were it not for catching sight of the occasional volcanic peak, you would almost believe you were in Europe—a perception that becomes especially strong when you reach the Tokachi district.

Located in the east of Hokkaido, Tokachi is the largest farming region in the prefecture. It benefits from rich volcanic soil, pure water from the surrounding mountains, and long summer days, making it ideal not just for growing crops but also for raising dairy cattle. Their milk has a high fat content that is well suited for making cheese. More than half of the natural cheese made in Japan is produced in Tokachi, and many visitors come from other parts of Japan—and from even farther away—to enjoy this local specialty.

Of the various specialty cheeses produced in Tokachi, one in particular stands out. Tokachi Raclette Cheese Moor Wash is one of the few cheeses anywhere in the world that draw on the properties of hot-spring water to develop their distinctive character.

Raclette is a washed-rind cheese, which in Europe would be washed with brine (saltwater). In contrast, mineral-rich hot-spring water that wells up from the ground in this region is used by the producers of Tokachi raclette. Known as “moor water,” it contains traces of organic plant material from the layer of vegetation deep below the soil through which it filters.

During the maturation process, each cheese is given washes of this hot-spring water, lightly coating it with the essential microbes that ferment the lactic acid in the cheese. This process helps to draw out and concentrate the natural umami of the cheese.

It takes about three months before the cheese is ready to be removed from the maturation chamber. Even then, it requires special care to ensure that it tastes its best.

There are many restaurants and hotels in the area that serve local foods, including Tokachi’s premium natural cheese. But raclette requires extra attention as it’s served. One place where you can be confident that it will be prepared in the best possible way is at Garden Spa Tokachigawa Hot Spring.

The name “raclette” comes from the French word racler, meaning “to scrape off,” which is a clue to the way this cheese tastes best. The whole cheese is first cut in half, and the exposed inner part is placed under a special heater until it begins to melt. This top layer of golden, molten goodness is then carefully poured over a serving of cooked potatoes and other vegetables.

A note of caution: as the cheese cools down, it starts to become firm again, so it’s important to eat the meal straightway—and not spend too much time photographing it.

For most people, though, that is rarely a problem. The aroma of the cheese and the expectation of the subtle mélange of flavors of the cheese on the local vegetables is likely to stimulate your appetite. Raclette makes an equally great match with pasta or bread. It also pairs perfectly with Tokachi wine, some of which has gained a strong following among international connoisseurs.

In the depth of the Hokkaido winter, these hot dishes will warm your spirit. And on a mild summer evening, they are even more enjoyable when you are eating alfresco and looking out on the beautiful countryside that produces this local cheese.

Obihiro is the main city in Tokachi and makes a good base for discovering the subprefecture. From Haneda Airport in Tokyo, there are direct flights to Tokachi-Obihiro Airport, which is about an hour by bus from the city center. Alternatively, there are more flights (both domestic and international) into New Chitose Airport. From there the train to Obihiro takes two and a half hours. The best way to access the agricultural hinterland is to rent a car.

Every year from late-January to late-March, a pop-up village is created on the icebound Lake Shikaribetsu, with bars, concert halls, and theaters made of ice. Yachiyo Farm, at the foot of the Hidaka mountain range, offers an opportunity to observe 1,500 head of cattle. It also has camping facilities if you wish to stay over.

Tokachi raclette cheese is made with fresh local milk from free-range cows. It is washed with water from the local moor hot spring, which imparts a distinctive flavor. The cheese is best eaten warm, melted, and poured over Tokachi vegetables. Hokkaido offers a diversity of Japanese cheeses, so be sure to enjoy some during your Hokkaido adventure, whether you go in the snowy winter, the verdant summer, or sometime in between.