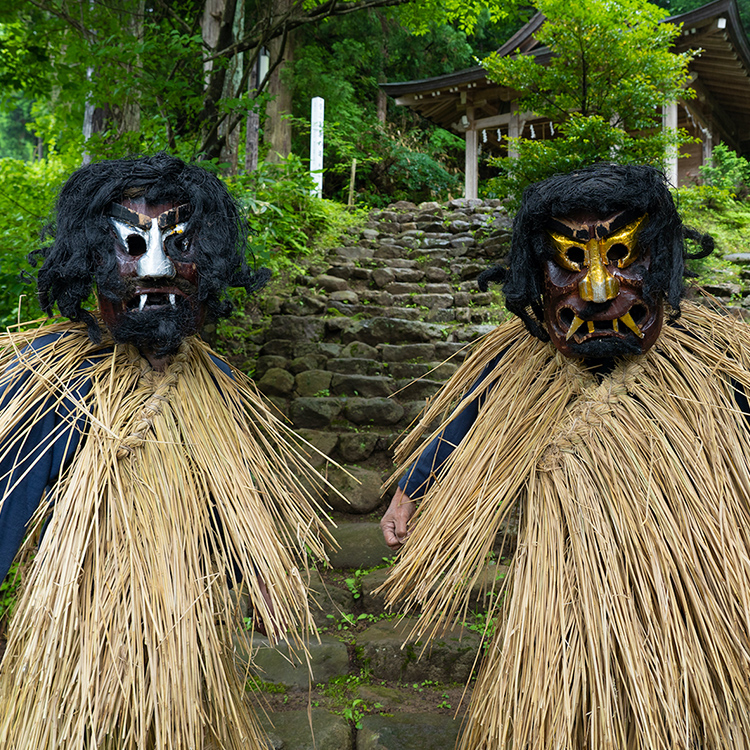 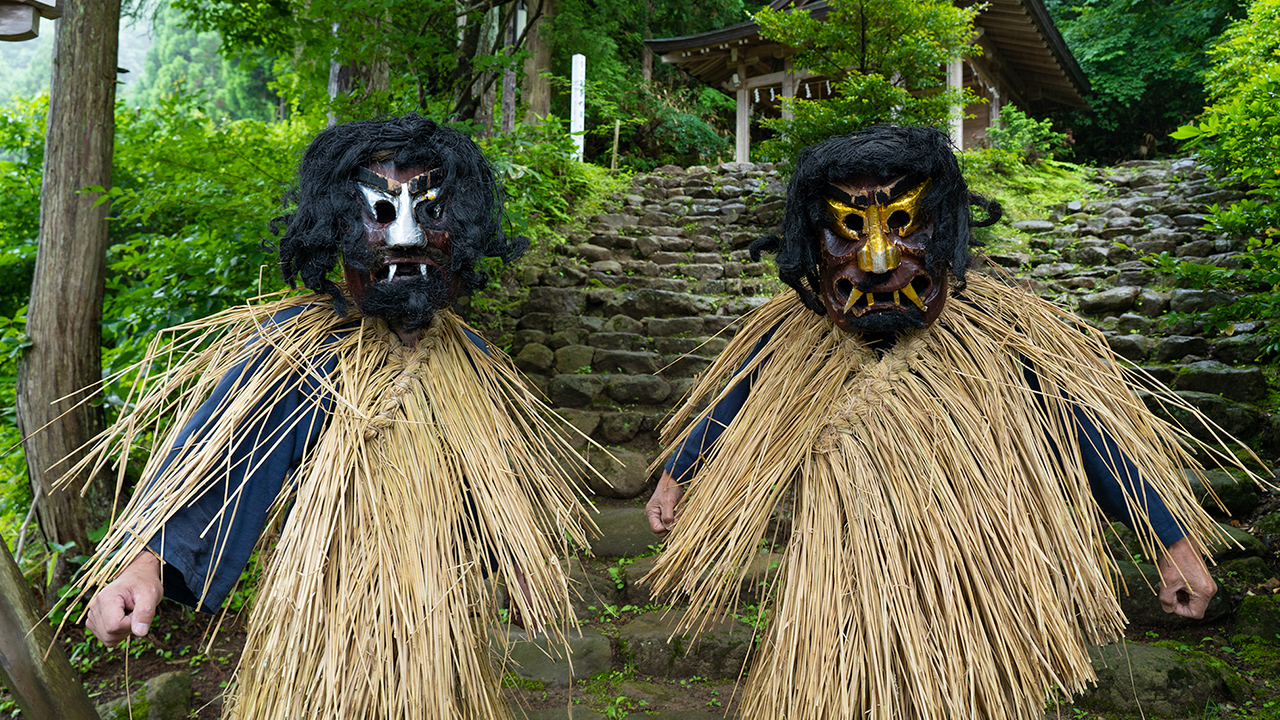 The Ogres of Oga Peninsula

Namahage descending from the mountains at Shinzan Shrine. 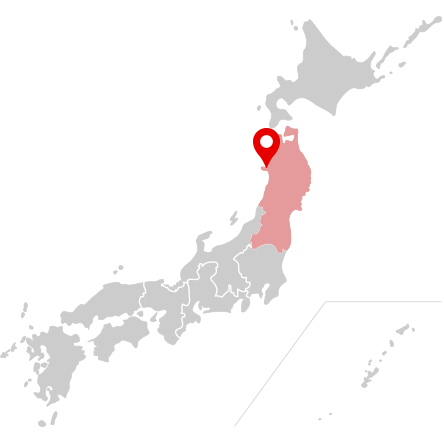 Lurking in the reaches of the Oga Peninsula, in the far northeast of Japan’s main island of Honshu, lurks a fearsome presence. Frequently horned, clutching a blade, and with fangs bared, the Namahage are not demons, as you might think, but rather ogres. While they may strike fear in the hearts of those who encounter them, they are ultimately a corrective force that spurs the idle into action and ensures that children listen to their parents, not just when the Namahage come knocking!

The culture of the Namahage is limited to the remote Oga Peninsula, so the only way to see the real deal is to make the trip to Akita Prefecture. Beyond the imposing presence of these ogres, the whole region is riddled with crafts, cuisine, and culture honed by the farming communities that have long called the area home.

Into the Realm of the Namahage

The moment you enter the Oga Peninsula, you are greeted by a great statue of two Namahage, which towers over you. And almost everywhere you look—from bridges to shop signs to sweets—you will see their snarling faces staring back.

Typically depicted as a pair—one with a red face and the other green or blue—the Namahage are clad in straw capes and leg guards. One carries a kitchen knife and the other a pail, which is used to carry the peeled off skin of insolent people afflicted with fire rashes (more on that later). They are a part of Japanese folklore that is not limited to statues, but is brought to life by local men who wear the masks and keep the tradition alive.

This custom was designated a Japanese National Important Intangible Folk Cultural Property in 1978 and was brought to global attention in 2018 when it was recognized as a UNESCO Intangible Cultural Heritage. There are a small number of similar mask-and-costume-based folk cultures in Japan—enough to fill a nationwide tour—but, for now, the Namahage are in a unique position of culture prominence.

The Art of the Namahage

It is fair to say that, for many visitors, the Namahage are at first a curiosity, a rough and fearsome oddity in what is typically thought of as a refined culture where geisha and immaculately raked Zen rock gardens reign supreme. But delve a little deeper and you will find their place in Japanese tradition—albeit a unique one.

At the Namahage Museum, located deep in the forest of Oga, this folklore has been curated as if it were an exhibit at an art gallery—and it is easy to see why. Each piece represents a huge amount of creativity and artistry. Every village on the Oga Peninsula took pride in making their own masks, and the desire to express that identity is palpable.

While there is a fixed depiction of Namahage that you see on souvenirs, the real Namahage are incredibly diverse. Looking at the countless masks in the main exhibition space, you will be hard pressed to find a common feature across them all.

Most, but not all, have horns, and some have gold paper details while others boast silver. Some have staring eyes while others merely have slits. They are all slightly different, but together they are Namahage.

Perhaps their scariest feature is the knife that one pair of Namahage invariably holds. For accuracy, some have hand scythes, and this is actually connected to the origin of their names, coming from a phrase the Namahage recite detailing their intent to peel fire rashes off with blades. Fire rashes were a common affliction of those who spent too long sitting around the hearth in traditional Japanese houses, and thus the knife symbolizes stripping away laziness.

This history can be explored thoroughly at the museum, as well as brought to life in the theater space. There is even a costume area for you to become one for yourself, and a resident sculptor who continues the tradition of making Namahage masks.

Beyond the artistry, what do the Namahage do? At the adjacent and separate Oga Shinzan Folklore Museum, the brave can find out for themselves.

Traditionally, the Namahage come down from the mountains on New Year’s Eve, in the middle of the harsh winter, but this performance is available all year round inside an authentic Japanese marigaya-style thatched house.

Once you are comfortably seated, a messenger comes to warn the household that the Namahage are on their way. In days gone by, if there had been any family tragedy in the household or recent births, the Namahage would refrain from visiting. In this contemporary scene, parents are warned to comfort their children should they become upset during the performance. These are responsible ogres at heart.

The Namahage knock before bursting into the house with their large capes thrashing around, feet stamping, and masks leering. As they rampage through the audience, the head of the household must placate them with food and wine, and convince them of the family’s virtue while the children cower.

But the Namahage see all from the mountains and are having none of it. They explain that if anyone is insolent in the house, then they can be summoned by someone clapping their hands three times in the direction of the mountains. With that, good and industrious behavior is guaranteed for another year. The straw left behind by the Namahage’s capes is kept as a good luck talisman.

While doubtless scary even for adults, the performance is handled with a light-hearted tone and the wellbeing of children in mind. Although some of the imagery is a bit dark, the substance has more in line with many of Japan’s other performing arts and is something that bonds a family together and binds them to the area. Once children become adults, they even learn to enjoy it and the deeper meaning behind the performance.

The Sacred Gateway to the Namahage’s Mountain

A short walk uphill from the Oga Shinzan Folklore Museum takes you to Shinzan Shrine at the trail mouth of Mount Shinzan, where the Namahage are said to reside. The location has been a place of worship where offerings are made to the gods for almost 2000 years. Once a year, in February, the Namahage Sedo Festival is held here. The event features ceremonial reenactments of the Namahage’s descent from the mountains as well as a number of other performances.

The shrine shows that there is a serious spiritual side to the Namahage. Generations of Oga Peninsula communities have survived the harsh winter with the stern ogres watching over them and inspiring them to overcome any hardship.

If there is a local delicacy to match the region, it has to be kiritanpo, which is a favorite on the Oga Peninsula as well as in Akita at large.

Kiritanpo is a simple dish with lots of flavor. Originally made on the go around a campfire or hearth, it has fueled many a farmer through a winter’s day. Cooked rice is first pounded and compacted on to a cedar skewer, then toasted and usually finished with a sweet miso sauce. It can then be eaten off the stick on the go or, for the peak kiritanpo experience, as one of the ingredients in nabe (hotpot).

The dish developed by resourceful farmers as a way of using leftovers. These days, it is an epicure’s delight, taking the best of Akita’s mushrooms, leaks, and parsley, and stewing them all in a hearty chicken stock along with sliced kiritanpo.

The kiritanpo soaks up all the flavor marvelously and is the definitive expression of Akita cuisine. There is no better way to warm up in the winter months—just watch out for the knock of the Namahage at the door!

Oga Peninsula is remote, but you can easily get there from Tokyo using just public transportation. You will need to take the Komachi Shinkansen from Tokyo Station all the way to Akita Station. The brilliant red Shinkansen is a symbol of Akita and offers excellent scenic views during the four-hour journey. From Akita, it is a one-hour trip on the JR Oga Line to Oga Station, where you will find a convenient Namahage Shuttle bus that takes you directly to the Namahage Museum, as well as other locations around Oga.

The Oga Peninsula is worth the trip on its own, but it is a great chance to discover more of Akita Prefecture, which is well connected by train and easy to explore by rental car. To the northeast is one of the most impressive sights of natural beauty in Japan: Lake Towada, which is part of Towada-Hachimantai National Park. In the east of the prefecture is Lake Tazawa, another stunning vista, and near which you will find the beautifully preserved samurai town of Kakunodate.

Kiritanpo is made from pounded rice compacted around a thick cedar skewer, which is then toasted over an open flame or by the embers of a hearth. A sweet miso sauce is often applied, and it is ready to eat. It can also be sliced into dumplings for use in soups and hotpots. Traditionally, because it was easy to make using any materials on hand, it was a favorite among travelers and farmers in the Akita region. Nowadays, it is made using fresh, quality rice and transformed into a delicacy that still channels the Akita spirit of old.