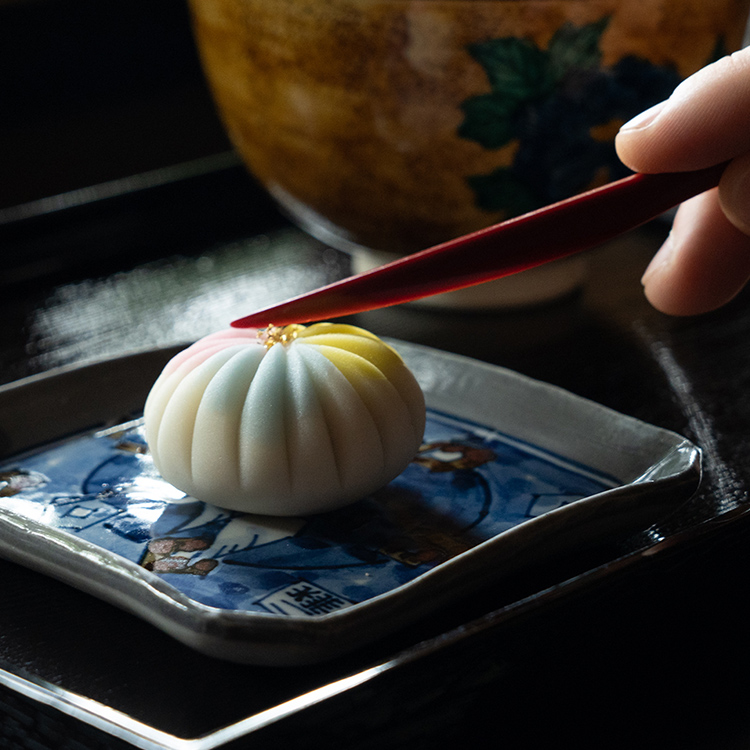 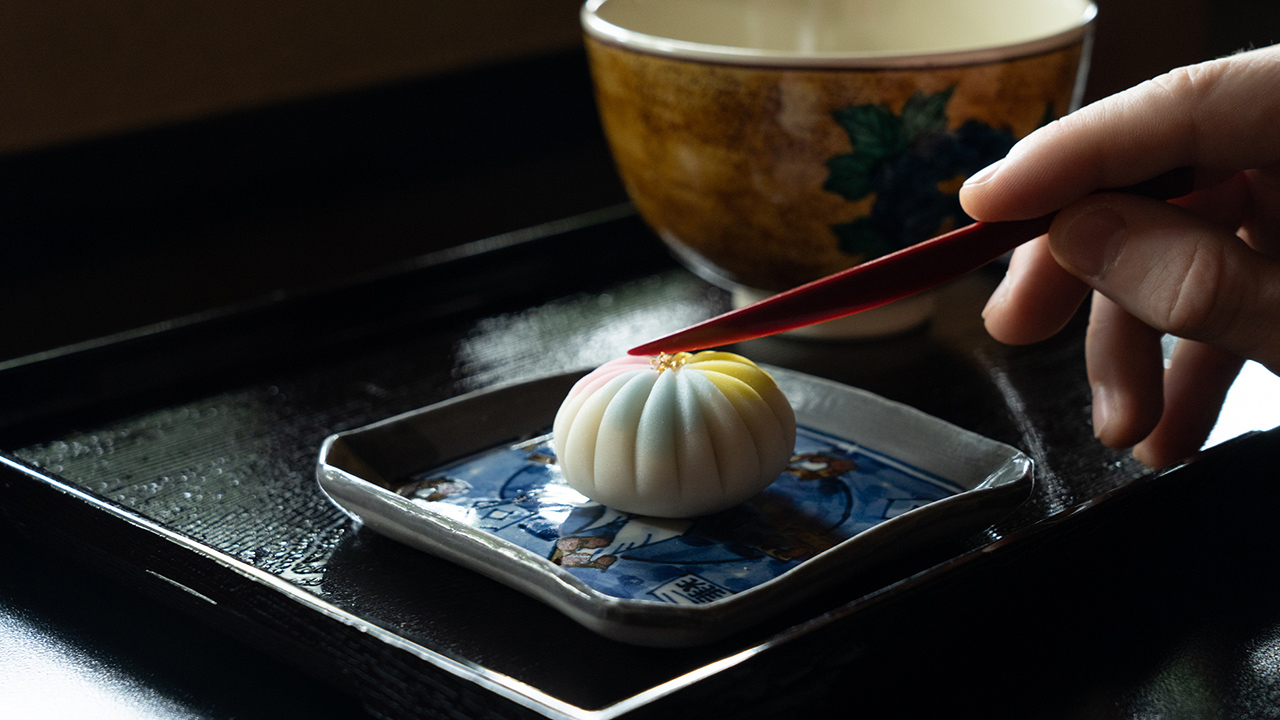 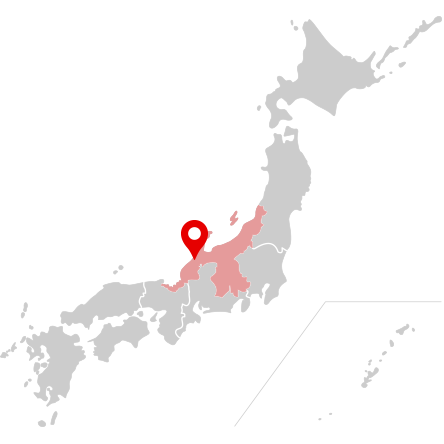 The city of Kanazawa is widely known as Japan’s kogei (artisanal-crafts) capital. The city’s colorful, intricately patterned Kutani ware (porcelain with overglaze) vies for attention with its hand-shaped Ohi ware (clay pottery), its Kaga Yuzen–dyed silk shares the spotlight with its delicately stitched Kaga-nui (hand-embroidered) fabric—and the list goes on! Kanazawa proudly claims the National Crafts Museum among its artistic and cultural institutions, and it has the highest number (per capita) of Living National Treasures of Japan for kogei.

Kanazawa is a city that buzzes with creativity even beyond crafts—the expansive gardens of Kenrokuen and their stunning natural beauty sculpted by industrious gardeners, the historic Higashi Chaya District, which is home to the traditional performing arts of the geisha, and the 21st Century Museum of Contemporary Art, which highlights more modern forms of expression.

But the list of its creative offerings is far from complete without the addition of one more. Kanazawa is an obligatory destination for those with a sweet tooth on the hunt for Japanese sweets that are as fine as any sweet found at a Parisian confectionery, making it the perfect place to step into the world of wagashi.

A Museum for the Art of Wagashi

Located close to the iconic gardens of Kenrokuen is the main store of Morihachi, a confectioner with almost four hundred years of history in luscious wagashi. It was once the exclusive confectioner to the rulers of the Kaga domain, where Kanazawa was historically located, and its artisanal confections have been presented to shogun, samurai elites, and even past emperors of Japan.

Of course, the perfectly balanced sweet flavor of Morihachi’s wagashi is highly valued, but the artistry applied in creating it is fundamental to its critical acclaim. Morihachi’s signature Chuoseiden is a variety of rakugan, which is made by pressing a carefully balanced mixture of simple ingredients into a wooden mold.

You can see these fantastic molds for yourself at the Kanazawa Museum of Wooden Japanese Sweet Molds, located on the second floor of the Morihachi Main Store.

There, the many possible shapes of rakugan can be seen in the intricately carved molds displayed as if in an art gallery. Looking at these molds, you may easily forget that they were not designed as ornamental pieces but instead as functional tools, which were actually used at one time to make sweet treats. Someone received, marveled at, and then ate the confectionary art created from these molds.

Japanese themes and the emblem of the Kaga clan, the old rulers of Kanazawa, feature prominently in the carved molds, but some obscure, amusing, or even modern themes began to appear at the turn of the twentieth century. Each sweet was the result of a close collaboration between the Kanazawa wood carvers and the wagashi artisans who painstakingly made each sweet.

You can use an authentic wooden mold to make rakugan for yourself, not just at the Morihachi Main Store but also at other Morihachi stores in Kanazawa.

First, mix your ingredients, which are in fact deceptively simple, consisting only of refined sugar from Tokushima Prefecture, rice powder from the Hokuriku region, where Kanazawa is located, and starch syrup as a binding agent. Color can be added with natural safflower, which makes the rakugan a soft red.

Once you have mixed the ingredients, the chef’s skill comes in, and you need a firm hand to press the mixture into the mold to ensure that the intricacies of the carving remain visible in your finished masterpiece.

The moment of truth comes when you pop the rakugan out of the mold. They are ready to consume immediately, which you are invited to do along with a cup of traditional green tea. You will be able to make enough sweets in a single forty-minute session to both eat there and take home with you.

The Contemporary Face of Wagashi

Beyond rakugan, you will see at Morihachi a variety of other shapes and styles of wagashi, including baked sweets and firm jellies. This begs the question, What defines wagashi?

As it turns out, wagashi is a rather broad umbrella term, with a lot of history under it. Prior to the modern era when Japan started to interact with the West, wagashi were simple okashi, or sweets. It was only to differentiate these sweets from Western-style sweets that a specific term was needed. So, using traditional Japanese ingredients and cooking methods seems to be the accepted definition of wagashi, but that doesn’t mean wagashi are stuck in the past.

Nakamiya Chisato, a Japan Wagashi Association award winner and the wagashi maestro at Morihachi, represents the new generation of creativity—while her designs play by the rules of wagashi, they are also thoroughly contemporary in execution.

Her homage to Kanazawa is a touch of gold leaf to finish her design, gold-leaf production being another of Kanazawa’s kogei (traditional crafts).

Into a World of Gold

A short walk from the Higashi Chaya District, which is Kanazawa’s historic tea-house area where chance geisha sightings are common, is Gold Leaf Sakuda, which has just marked its one hundredth anniversary.

Kanazawa is actually the source of almost all Japan’s domestic gold leaf, so the next time you find yourself admiring the golden glow of a Japanese-temple interior or a Buddhist statue, you can feel almost certain that its gold leaf came from Kanazawa.

At Gold Leaf Sakuda’s Main Store, you can tour an atelier that is alive with activity and flecks of gold dancing in the air, before trying your hand at making your own piece. Perhaps you are envisioning a gilded box for your freshly made rakugan?

Wherever you go in Kanazawa, the artisanal spirit is never far away, and once you have tasted its exquisitely crafted wagashi, you will be inspired to seek out more wagashi on your travels. Absolutely every region in Japan has wagashi that is worthy of note, so you will be embarking on a journey that may well take a lifetime.

If you are in central Japan, then you are within easy reach of Kanazawa, served as it is by numerous train lines, including the Hokuriku Shinkansen, which puts you within two and a half hours of Kanazawa Station from Tokyo Station. Alternatively, if you are further afield, Komatsu Airport is connected to domestic travel hubs by several airlines.

Once in Kanazawa, you can get a one-day pass for Kanazawa’s Loop Bus and explore the city to your heart’s content. You can ignore the timetable since buses run between all the popular sightseeing stops at fifteen-minute intervals in both directions of the loop, meaning you are never kept waiting for your next destination!

Kanazawa is located in Ishikawa Prefecture in the Hokuriku region of Japan, which is the area to the north between Tokyo and Kyoto. The main trade route between these two cities passed this way prior to the advent of modern, large-scale construction that would eventually allow a Shinkansen line to be built along the direct mountainous route connecting the two cities. Taking the Hokuriku Shinkansen, you can explore the eastern part of the area on the way to Kanazawa from Tokyo, with stops at the leisure capital of Karuizawa and the temple town of Nagano. Alternatively, to the west of Kanazawa arching down to Kyoto and Osaka, you can visit the hot-spring resort of Awara Onsen and the active Zen monastery of Eiheiji.

Japanese sweets (wagashi) rely mainly on sugar or azuki bean paste for their sweetness, although you will find fresh fruit, sweetened mochi, and nuts also used if you delve deep into the world of wagashi. There are thousands of regional varieties all across Japan, making wagashi the ideal centerpiece of a tasting tour in parallel with any sightseeing trip through Japan. Wagashi are rarely available outside Japan, because they should be eaten fresh, usually within a couple of days of production, or at most a couple of weeks, depending on the variety. This is one culinary culture that must be enjoyed in Japan!